The Basics of Hamster Ownership 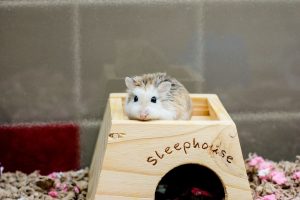 Hamsters are not suitable for everyone. Please allow me to begin by stating this. Especially when small children are around, hamsters need extra care (as they so often are). Due to their tiny size and minimal living space, several parents prefer to allow their young children to keep hamsters. However, there are superior pets for young children (such as guinea pigs). Hamsters are capable of biting and will bite if provoked, but properly socialized, they can be quite sociable and charming pets. Youngsters with pet hamsters must be supervised, since hamsters may bite and children can inadvertently harm the hamster.

If you are considering obtaining a hamster, or any other pet for that matter, you should always conduct study beforehand and keep the following in mind:

Introduction to a New Hamster

If you spend your time working with hamsters, you can create quite adorable fur balls. When you bring your hamster home, you should keep him in his cage for at least 24 to 48 hours, and preferably longer. This time alone helps the hamster to adjust to his new environment, including his bedding, food, accessories, and cage layout, as well as the scents, noises, lights, and people outside of his new cage.

Use Treats to Earn Your Pet’s Confidence

After a few days, attempt to determine your new pet’s preferred meals, such as sunflower seeds, yogurt treats, raisins, or carrots. Open the cage door and place the treat in your palm before the animal. Let him sniff and consume the treat; this demonstrates that you won’t harm him and will instead offer him something tasty. Perform this action repeatedly, multiple times each day, for several days. Eventually, the hamster will understand that you will not harm him, and that you may not be that terrible after all.

Hold your hand at the cage’s entrance with the reward on your palm, and let the animal to smell, nibble, and “taste” your hand. The hamster will stretch onto your hand to collect the reward, at which point he will likely flee. Eventually, you will be able to withdraw your hand from the cage doors while still holding the hamster.

Eventually, if he is awake, your hamster will see or hear you and rush to the cage entrance, begging to be let out and socialized.

Be Cautious With Young Children

Always monitor young children who own hamsters. I have heard several horror tales in which the youngster drops the hamster, throws the ball containing the hamster, squeezes him, or worse. In addition, you do not want your kid (or anybody else’s) to be bitten by a hamster, nor do you want the child to harm the hamster. 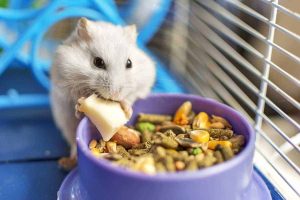 What NOT to Give Your Hamster to Eat

Never provide chocolate, coffee, or alcohol to your hamster. 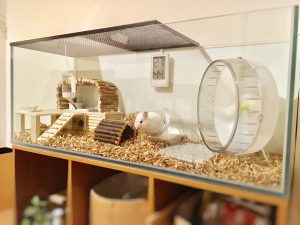 You may house your hamster in any of the hamster/gerbil homes manufactured by Critter-Trail, SAM, or any other firm. You may even keep it in an old aquarium, but the tank must be at least 10 gallons.

Wood shavings may be used as bedding for a hamster, so long as they are NOT pine or cedar, since their oils and scents might aggravate upper respiratory issues. Aspen wood shavings are an excellent bedding material. Carefresh, Total Comfort, and Soft Sorbent are further quality options for bedding.

Ensure that the tank is emptied at least once every week. That involves removing everything from the cage and replacing the bedding. If you are successful in potty training your hamster, you may go two weeks without emptying the bedding if you empty the hamster’s potty at least once each day.

Hamsters are nocturnal, meaning they are mostly active at night and sleep during the day. You may adapt your hamster to your daily routines, causing him to become more active earlier in the evening, but this will not occur overnight.

Why Does My Hamster Stuff Its Cheeks with Food?

Hamsters have pouches in their cheeks, so don’t be frightened if you see that your hamster’s cheeks are disproportionately huge. In the wild, since hamsters are burrowing animals, they would take enormous mouthfuls of food from the surface into their burrows. Having these pockets also aids wild hamsters in shifting substrate.

In captivity, your hamster will continue to remove all of his food from his feeding dish, stuff it between his cheeks, and hide it in the corner or around his cage. Using his pouches, he may also shift softer material to create a nest in the cage.

Syrian hamsters, popularly known as teddy bear hamsters, are NOT sociable. They prefer to live alone as opposed to alongside other hamsters. In the wild, they did not coexist, and this feature was retained in captivity.

I have seen some hamsters tolerating each other while others did not. I once had three hamsters, two females and a male. When my ladies were pregnant, I separated them and left one female with the male. The male/female pairing began well since they never fought and always got along, but when I attempted to pair the two females, the one housed with the male would harass and pursue the other female.

It is almost never a good idea to put many teddy bear hamsters in the same cage. In contrast, miniature Siberian hamsters are highly gregarious and may live in small groups.

Why Does My Hamster Gnaw So Frequently?

Hamsters chew; this is common knowledge. They must chew in order to maintain their teeth at an appropriate length in order to consume food. Because hamsters’ teeth continue to develop throughout their lives, they need chew sticks. You never know what chemicals have been put on sticks found outdoors, therefore you should never offer them to your hamster. Even if you do not apply pesticides, the wind may transport your neighbor’s chemicals into your yard.

Newer What’s the Big Deal About Freeze-Dried Dog Food?
Back to list
Older The World’s 10 Most Colorful Birds