The World’s 10 Most Colorful Birds 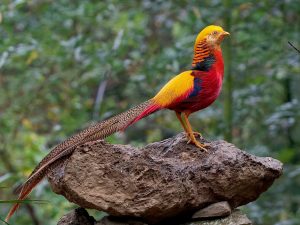 Colors play a significant part in our lives, and we all respond to them differently. Our color tastes influence everything we do: what we wear, how we arrange our houses, and even what we buy. It’s no surprise that we like seeing brilliantly colored birds.

Birds with various colors in their feathers, beaks, and other body parts may appeal to us. Furthermore, their social behavior has influenced our decision to keep them as pets, and they have been featured in poetry and popular music.

This article features ten of the most colorful birds. The Scarlet Macaw is a big parrot native to tropical South America with bright red, yellow, and blue colors. It has a long tail and a pale skin patch around its eyes and beak. The beak is dark black at the bottom but pale at the top, while the legs and feet are black. In captivity, the lifetime may be extended to four to five decades. They are monogamous, build their nests in tree hollows, and share responsibility for their young.

They are capable of flying at great speeds and often do so in pairs or small groups. For communication with their groups, their squeaks and yells may be rather loud. Fruit (even before it is fully mature), nuts, and seeds make up their diet. Toco Toucan’s fame stems from its bill, which is fairly huge and colorful. There are forty distinct species, each with its own set of colorful bills. Despite its size (which is often more than half the size of the body) and form, the bill serves more as a deterrent than a weapon. Their legs are small and powerful, and their toes are unusual in that the first and fourth toes are reversed. Fruit, insects, and even tiny lizards are among their favorite foods. They reside in tiny flocks and tree holes. They are endemic to the tropical jungles of South America. 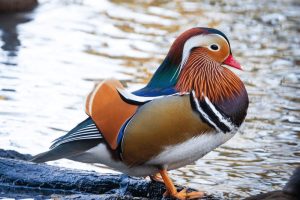 The Mandarin is an East Asian medium-sized duck that is one of the most colorful perching ducks. Males are readily distinguished by three unique body parts: the bill is red, there is a white crescent over the eyes, and the face is reddish. The purple-colored breast of this duck is enhanced by two vertical white bands. Female ducks deposit their eggs in tree holes, usually near small lakes. During incubation, the males protect themselves. Asian mandarins have been spotted migrating to Eastern China or Southern Japan. Their food consists of insects, snails, tiny fish, plants, and seeds. 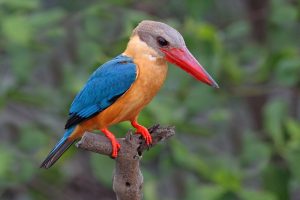 Stork-Billed In the Indian Subcontinent and Southeast Asia, the Kingfisher is one of the most common tree kingfishers. It has a large beaked relative to its size and a variety of colors. It usually has a green back, a blue tail, and wings. The legs are brilliant red, as is the bill, which is very huge and gorgeous. However, the plumage pattern varies across the 15 races and the habitat, which is found along rivers, beaches, and lakes. They’ll sit on a tree limb and dive down to catch fish, crabs, and frogs. 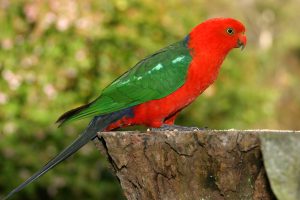 The Australian King Parrot is one of the most colorful birds in Eastern Australia, with males distinguishable by their red head, breast, and lower undersides. Female parrots have a distinctive green head and breast, as well as a grey beak. Fruits, seeds, and tiny insects are their main sources of nutrition when living in couples or groups in the humid and dense woods of Australia’s eastern coastlines and ranges. Sedentary, they deposit their eggs in the hollow trunks of trees with high entrances. 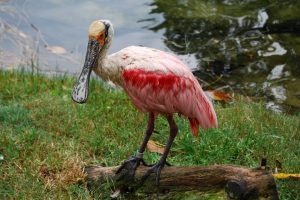 This massive bird stands out with its pink plumage and spatulate light grey beak. It has white feathers on its neck, chest, and upper back, but crimson legs and eyes. The most stunning and wading bird of North America, it may be found in ponds, marshes, and swamps. To capture tiny fish and amphibians in shallow water, they keep their beak half submerged. The three cream-colored eggs deposited by the female have a three-week incubation period, which is shared with the male.

Red-legged A partridge is a bird that lives on farms. It has pink-red legs and a little bright red beak with a crimson ring around the eyes. The top neck and chin are creamy white. It is a game bird that deposits its eggs in a ground nest. This species also consumes seeds and tiny invertebrates. Its oddity is that it runs instead of flying, despite the fact that it can fly for short distances. 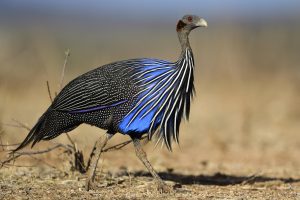 Vulturine Guinea fowl, another gregarious species, is a huge bird with a tiny skull. This species stands out among the guinea fowls because it is taller and produces unusual noises. It has a bluish gray band of small chestnut feathers around the neck and a blue upper back and breast. When pushed, it prefers to run rather than fly. In lush grasses, shrubs, or trees, hens lay cream-colored eggs. Northeast Africa, Ethiopia, northern Tanzania, and Kenya are all home to them. 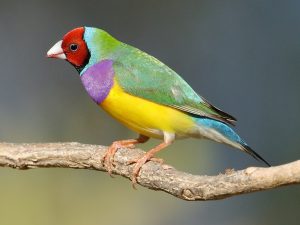 Although it is one of Australia’s most raised in captivity and beloved birds, it has unexpectedly been classified as an endangered wild species. Fortunately, rehabilitation measures are underway. They come in a variety of colors, including green, yellow, and green, although males’ chests are typically purple. They must leave the tropical savanna forests due to a lack of water and food. Seed eaters, they breed in tree holes. The wooing dance of males is well-known.

The Chestnut headed Bee Eater is a tiny, thin bird with a brightly colored plumage that lives throughout the Indian Subcontinent and in certain Southeast Asian nations. This little acrobatic bird is easily identified by its chestnut-colored head and crown, greenish breast and lower regions, and gorgeous dull olive tail feathers. Wasps, bees, and dragonflies are among the insects they trap in the air. They live in colonies near water on sandy beaches.