How to Avoid Your Cat Scratching Your Furniture 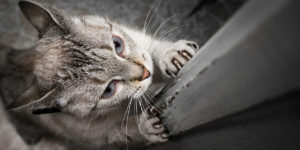 Consider delaying the purchase of a lovely couch since you have an inkling as to what will happen to it once it is in your house. Cats have a tendency to dig their claws into things as soon as they sight them, and you know what will happen when they do. As a cat owner, you may just accept the fact that buying nice furnishings may be out of the question. You may assume that cats cannot be trained, or you have purchased a scratching post, but your cat has not reacted. Maintaining a positive attitude and perseverance is essential in educating your cat to respect your belongings. Make no mistake about it: Cats can be taught simple habits like scratching on their posts. Cats may be taught to respect your property with suitable training methods and a scratching post that your cat will like.

A Few Words on Defeating

Declawing was formerly a popular procedure, but many pet owners nowadays have resisted the practice. Cats might be traumatized by the procedure of declawing, which prevents them from scratching. It would be like eliminating the top portion of each finger. Despite the fact that scratching is a natural behavior for cats, there is no need to resort to cruel procedures like declawing in order to protect your furnishings.

Learning to Stop Your Cat from Unnecessary Scratching

Positive reinforcement, such as tasty cat treats, may be used to teach your cat new, desirable behaviour. Instead of attempting to break a stubborn cat out of its habits, it’s typically simpler to start with a kitten. In the beginning, it is useful to sympathize with your cat’s need to scratch. The most common reasons cats scratch are to sharpen their claws, exhibit agitation, or mark their territory. As soon as you see that your cat is growing agitated, consider directing him or her toward an appropriate place to scratch, such a scratching post, or toy. In order to keep cats from chewing on your wires, you may spray the furnishings with a sour apple-like scent that they despise. It’s also important to keep the nails of your cat well-trimmed so they don’t do as much damage.

Begin teaching your cat with some cat treats and the correct scratching post. There are several ways you may keep your cat from scratching the couch, such as keeping an eye on him or her and gently saying, “no.” When your cat chooses to scratch on the scratching post instead on the sofa, thank your pet with one of its favorite treats. ” Positive reinforcement works on all animals, even if they aren’t as eager to learn tricks as dogs. Eventually your cat will stop scratching your sofa to sharpen its claws if you keep rewarding it with praise and goodies whenever it uses the scratching post.

To Buy or Not to Buy a Scratching Post

How much a cat likes a particular scratching post is determined by the animal’s preferences. For the most part, it’s a good idea to stick with the type of scratching post your cat has used in the past, but don’t be afraid to try something different. A scratching post, as the name implies, is a post on a heavy-duty foundation for scratching purposes. To make a scratching post, corrugated cardboard rings wrapped in numerous layers is the most popular choice of material. These scratching posts might survive longer if they are wrapped with sisal. If you want to take the pleasure to the next level, consider including a feathered toy with a bell on top.

Your cat could love a scratch and slide model for an extra depth. Sisal board is used as a basis instead of a traditional post. A scratching area with a waving board and a scratching post is available. Scratching on the curved surface simulates scratching on the couch’s side, which can help break cats of their scratching habit.

In addition to scratching posts and play areas, you may also locate multi-tiered items. Afterwards, your cat may relax on the comfortable perch on the post after using it to exercise its claws. Cat furniture with a crawlspace and a scratching post at one end is available, as well. Give your cat a scratching post bed made of fiberboard and wood veneers with reversible features if your cat likes to scratch. If you get a bed for your cat, he’ll be able to scratch his own stuff instead of yours.

Utilize a catnip spray and give your cat incentives for good scratching behavior to get your cat to use his scratching post more often. It’s possible that your cat’s behavior may be re-trained so that you can enjoy your beautiful furnishings and the delight of having a cat in your house for years to come.

Newer Change a Pet’s Life and Your Life Will Change As Well
Back to list
Older Food Toppers: What’s on Your Dog’s Plate?