How Come My Puppy Is Always Hungry? 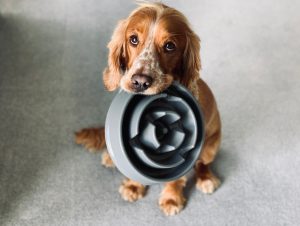 When you adopt a new puppy, it’s easy to become blinded by love. All you see is a lovely little bundle of pleasure and energy, eager to snuggle and play the day away.
However, you must resist the temptation to give him whatever he desires because of those wide, wonderful eyes.

I understand how difficult it is!

When I was a child, my dog appeared to be constantly hungry, and as a caring parent, I felt obligated to feed him anytime he batted his lashes in my direction.

That is an egregious error. While your puppy may appear to be hungry at all times, he is most likely attempting to trick you into giving him a food.

However, how can you be certain?

Why Is Your Puppy Always Hungry?

Puppies require instruction in all facets of life, even eating! When your puppy was still with his mother, he had complete freedom to feed whenever he pleased. That type of schedule will be impossible to maintain in his newly domesticated existence.

You’ll want to feed your puppy numerous times a day at regular intervals. It may take some time for him to adjust to your schedule, but be patient and consistent!

Your Own Negative Personality

That is correct! You may be to blame for your dog appearing to be voracious.

As with training your dog to eat on a timetable, you must also ensure that your dog does not learn to beg for food. As a result, you should never offer table scraps to dogs, especially while they are young and naive.

Apart from health concerns, after your puppy has had his first taste of human food, he will return for more. This will obviously result in you feeling sorry for him and feeding him more than he requires.

While the majority of their wild nature has been bred away through decades of domestication, your dog retains certain wolf-like traits.

Because your puppy has no idea when his next food will arrive, he is overjoyed anytime you feed him. He’s likely to gulp it down in a matter of seconds since he wants to ensure his stomach is full.
If your puppy is a little older or was rescued from the streets, this tendency may be much stronger since he has lived through food poverty.

Though this is extremely unlikely, your puppy may be suffering from a medical condition that is impairing his eating (such as worms, diabetes, malabsorption, etc.)

If his appetite does not subside after a few months, you should call your veterinarian to discuss your concerns.

How to Handle a Hungry Puppy

As previously said, you must ensure that your puppy is fed on a consistent timetable.

When you initially begin, you should give him numerous little meals throughout the day. At the start of your training, it is advised that you feed him three to four meals each day. After a few months, you should be able to reduce your meals to 1-2 per day.

When it’s time for you to eat, separate yourself from your dog. This will not be simple, but you are 100 percent capable of doing it!

If you’re crate training your puppy, you can always take advantage of this time.

Consumption Should Be Slowed

There are two strategies for reducing your puppy’s food consumption that are recommended:

The first is to insert a significant obstruction, such as a ball or a cup, into his bowl, forcing him to work around it. Thus, it will take him significantly longer to eat his meal.

Additionally, specially designed puzzle bowls (such as the one seen below) exist for this purpose!

The second alternative is to dilute your dog’s food with water. While it may sound disgusting, some puppies thrive on somewhat moist food. Due to the fact that it becomes mushy and sticky, they’ll need to eat more slowly than usual.

How Do I Determine Whether or Not I’m Feeding My Puppy Enough?

As with people, dogs require a set number of calories every day.

It will be easiest to monitor his weight and ensure that it follows his breed’s regular growth patterns.

Additionally, you may examine the information printed on the back of his puppy food package. While most bags overestimate the amount of food your dog will require, they are often correct.

Examination of the Physical

It’s fairly self-explanatory, but you can determine if your puppy is healthy just by looking at him.

You should be able to feel your dog’s ribs beneath the surface of his skin when you touch him. You should never be able to see any of his bones, though. Additionally, he should have a prominent waistline.

How to Tell if Your Puppy Is Being Overfed

If your dog is overfed, believe me, he will communicate this to you. The most telling indicator is seen in his digestive habits.

For instance, if he vomits or has profuse diarrhea, you may be giving him too much. Due to his little stomach’s inability to manage the food, he will attempt to evacuate it as rapidly as possible to alleviate his swollen stomach.

When your puppy will require significantly more food while he is young, you should notice a physical difference if he has been overfed. When a dog has acquired an excessive amount of weight, you will be unable to feel his ribs or see his waistline.

He may also begin to exhibit signs of discomfort. This might be the result of his rapid bodily expansion placing an undue strain on his skeleton.

Feeding your dog might be challenging. There is a narrow line between overfeeding and underfeeding. What is the best advise I can offer? Trust your instincts.

Your puppy will communicate with you when he is hungry or unwell, and you will notice a difference in his physique and demeanor.

Newer Flowerhorn Cichlids: How to Care for Them
Back to list
Older What You Can Do If Your Dog Is Stealing Your Stuff