Flowerhorn Cichlids: How to Care for Them 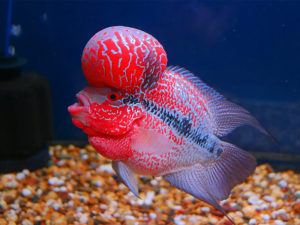 The flowerhorn cichlid is a hybrid, so it’s a colorful and lovely addition to your aquarium.

Cichlids aren’t picky when it comes to picking a partner from among their own species. This implies that different varieties of cichlids mate with each other to produce intriguing hybrids, such as the flowerhorn.

The flowerhorn cichlid’s origins may be traced back to the early 1990s, when it was formed in Taiwan and Malaysia by crossbreeding certain popular Central American cichlids.

Because of their vivid color and odd look (they have a big hump on their head), they are immensely popular among hobbyists.

The flowerhorn is a relatively easy fish to care for. If you decide to add the flowerhorn to your aquarium, you should not have many troubles, even if you are a beginner.

If you’re interested in purchasing this fish but aren’t sure how to care for it, read our detailed care guide, which will lead you through all of the essentials.

The flowerhorn is not seen in the wild since it is the consequence of crossbreeding in captivity.

It’s an aggressive decorative aquarium fish, but that shouldn’t stop you from purchasing one for your tank, especially if you have a large one and want colorful fish in it.

It is critical that you familiarize yourself with the tank and water needs for maintaining healthy and attractive flowerhorns before purchasing this fish.

The flowerhorn cichlid is a huge fish with a long tail. Flowerhorns may reach a length of 12-16 inches on average (between 30-40 centimeters). If you’re contemplating flowerhorns, this implies tiny tanks aren’t a possibility.

If you just want to keep one flowerhorn cichlid, you’ll need a tank with a minimum volume of 75 gallons.

If you intend on buying two flowerhorns, the tank will need to be much bigger to allow the fish to move around freely — anywhere between 100 and 120 gallons.

Finally, if you wish to maintain more than two, the tank size may need to be increased to 200 gallons.

Temperature of the Water

The flowerhorn is a resilient fish that doesn’t require too many unique circumstances to thrive. The temperature of the water in which you’ve kept the fish should be between 75 and 89 degrees Fahrenheit (24 and 32 degrees Celsius).

The flowerhorn is, as previously said, easier to care for than certain other freshwater fish.

This isn’t to say that you shouldn’t make some sacrifices.

To begin, make sure your tank’s water is dechlorinated. The pH level of the water should be in the region of 7 to 8 for the flowerhorn to thrive and flourish.

In addition, the water’s hardness should be kept between 9 and 20 dGH.

The lighting in the aquarium might be comparable to that used for freshwater fish. LEDs appear to be enough.

You will need to install a decent quality canister filter, like with other aquariums, to keep the water clean at all times. Before introducing the flowerhorns to the tank, keep the filter running for at least a week.

Clean, gently flowing water with weekly water changes are the most fundamental requirements.

Flowerhorns are renowned for making a mess when eating, therefore using an aquarium vacuum to remove this waste as part of your regular cleaning practice is essential.

Plants and tank decorations are lovely to look at, but they may not be appropriate for flowerhorn cichlid aquariums. Because these fish are quite active and like digging, this is the case. As a result, any plants you put in the tank are likely to be killed quickly.

If you want to add any decorations, make sure they’re securely secured, else the fish will just knock them over. Some keepers even go the further step of securing them with aquarium-safe silicone sealant to ensure they don’t fall over.

The flowerhorn cichlid was created as a consequence of human interference, and it has taken on some of the less desirable aspects of human character along the way. To be more precise, this fish is noted for being aggressive and possessive of its territory.

In addition, the fish is a predatory species. Not only will the fish try to attack any tank mates you add to the aquarium, but it may also bite and attack you when you are feeding it or performing routine tank maintenance.

The flowerhorn is a very busy creature that will eat any plants or ornaments you put in the aquarium.

As a result, they are normally maintained alone or in couples in minimalistic tanks.

The flowerhorn is a simple fish to keep, especially if it is your aquarium’s sole fish. It is relatively straightforward to transfer them to a new tank, but you must bear in mind that the water temperature and composition should not be too different from what the fish are used to.

There can’t be much of a difference between the flowerhorn’s current environment and the one you introduce it to.

If you already have fish in your tank, make sure they’re compatible with the flowerhorn, as it’s a territorial and aggressive cichlid. If you’re not careful, this might result in a variety of unpleasant situations in your tank.

Aside from that, flowerhorns are busy and robust creatures who take little time to adapt to their surroundings.

The notion of having a bright aquarium with a variety of species might be appealing, but if one of these fish is a flowerhorn cichlid, you might want to reconsider.

Because this is an extremely aggressive species, keeping a flowerhorn alone or introducing a couple into your aquarium is strongly suggested.

It’s also not simple to pair these fish. Many people purchase numerous cichlids in the hopes that they would couple up naturally, but this may be devastating. While the dominant fish manage to survive, the less dominant fish are harassed and eventually perish (or are eaten).

You may need to approach a breeder with a lot of experience in the sector to prevent such a situation. That breeder could be able to match you up with a match made in heaven.

You can try some of the species listed below if you still wish to maintain other fish in your aquarium:

Because flowerhorn cichlids live under continual stress, most fish cannot survive in the same aquarium as them.

When it comes to their territory, flowerhorns can be large bullies, making it difficult for other fish – even bigger ones like angelfish that grow up to 6-8 inches – to coexist with them.

Many individuals experiment with different fish pairings in their tanks before deciding that flowerhorns do best when maintained alone in large tanks with simple décor.

Flowerhorns are a feisty bunch. This, along with their fast metabolism, allows them to consume a large amount of food. They are carnivores, thus they will require a variety of foods to sustain their energy levels.

Every day, feed the flowerhorn cichlid two or three large meals. You may feed them a broad variety of meals due to their large appetites. While flake meals can only be fed to very young fish (they won’t feed a full-grown flowerhorn), you may feed them cichlid-specific pellets from a fish store.

They appear to love a variety of live foods, including tiny fish, works, shrimp, and so on.

Meat can be fed to flowerhorns, but hearts and livers should be avoided.

Green leafy vegetables that have been mildly cooked can also be included to their diet to meet their nutritional needs.

There aren’t many methods to tell the male from the female flowerhorn.

The procedure of producing these fish is very straightforward, but you must exercise extreme caution due to their innate aggressiveness. When it comes to flowerhorn cichlids, that is the one big issue that might occur, so make sure you have a large enough tank to handle the couple.

The female fish will lay eggs, generally on a flat rock, if you’ve located a couple and placed it in a large enough tank. After that, the male flowerhorn will fertilize the eggs.

After the eggs have been fertilized, a divider should be used to separate the male from the female and her eggs.

Flake food, pellets, and brine shrimp can be given to the tiny fry as they hatch.

Flowerhorn cichlids are not prone to any specific illnesses, however they are sensitive to several of the more prevalent diseases that affect freshwater fish.

Any change in pH or water quality in the tank might cause health problems for the fish, thus it’s critical to maintain the right circumstances.

The following are some of the most frequent illnesses:

The flowerhorn cichlid is a stunning fish that will complement your aquarium well. This fish is quite easy to care for, but because of the quantity of space it requires and the feed it requires, it can be costly.

Because of its aggressive nature, it’s also difficult to keep the flowerhorn alongside other fish.

If you can get beyond these drawbacks and are okay with keeping just one or two flowerhorns, you may purchase these vibrantly colored fish from a reputable breeder.

Newer How to Select a Right Veterinarian
Back to list
Older How Come My Puppy Is Always Hungry?