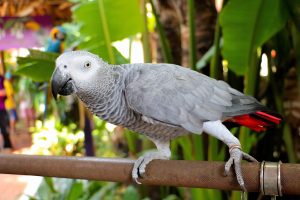 Parrots are lovely little animals with a lot of personality and love to offer. Some animals are born with a remarkable capacity to learn and imitate words and non-speech sounds. They may do this to gain the attention of their owners or other parrots, or they may just be amusing themselves.

A parrot’s ability to communicate relies on which species it belongs to, although not all members of a species will be able to communicate. However, appropriate training and excellent health nearly ensure that these parrots will speak.

The greatest apparent numbers known to the author for each parrot species discussed in this article are the vocabulary figures for that species. It’s worth noting that a parrot’s vocabulary may grow with time.

Several studies have shown that the African grey is the most intelligent and capable bird species in terms of intellect and communication. The famed parrots Einstein, Alex, and Griffin have persuaded the world that parrots have emotional and mental states after exhibiting a range of cognitive and linguistic skills. Despite the fact that these well-known birds could only talk around 200 words, some experts believe that with considerable training, African greys can speak 500 and even 1000 words.

The Congo and the Timneh, two African Greys, are the top talkers in the parrot world. The Congo is a bigger and more popular African grey, whilst Timneh is a smaller and less costly African grey. Both, though, are excellent communicators.

When compared to Congo, Timneh has a lower learning capacity but may begin learning at an earlier age.

A juvenile African Grey, unlike other talking parrots, may not begin to speak until it is well over a year old. 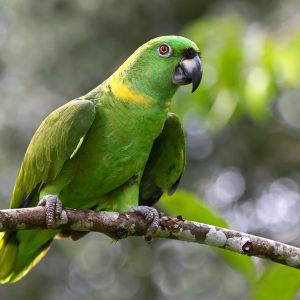 Amazons are among the world’s finest talking parrots. They are sturdy, energetic, and bossy birds. Many Amazon species are reasonably adept talkers and whistlers, with certain species excelling at phrases. The Amazon’s voice is clearer than that of African Grey parrots. Among the Amazon animals that communicate, the yellow-naped Amazon is the most chatty.

They have a propensity to become one-person birds that are hostile to others. They like biting anything and everyone they come across, however some Amazon owners report that their birds never bite them. Amazons are capable of becoming tamed birds with some specific efforts to make them people-friendly. 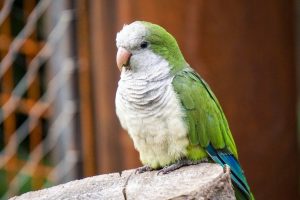 Monk parakeets are little to medium-sized birds that are clever, amusing, and feisty. Depending on their interaction and/or temperament, they may be a buddy or a badass to humans. They are terrific talkers who, when in the mood, may rave for hours. They like being stroked and held in the hands. They’re also fantastic as a shoulder bird. 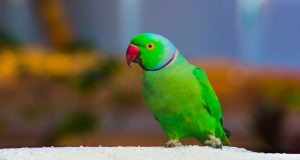 One of the best talking parrots is the ring-necked parrot (RNP). They are robust and clever, but in comparison to most other talking parrots, they are typically quiet and domesticated. RNPs are more active than cockatoos or amazons, but not as much as cockatoos or amazons. Ringneck parakeets are less costly since they are more common. RNP are one of the top parrot species in terms of vocabulary. 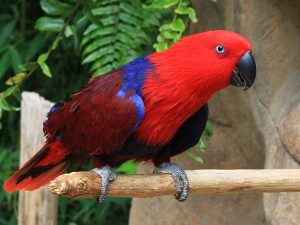 Eclectus are medium-sized birds with a relatively excellent ability to communicate. They are unique among parrots in that they have the most obvious sexual dimorphism and males who are more docile than females. Females have a tendency to traumatize males in breeding settings.

Budgies are the proud owners of the Guinness World Record for having the greatest vocabulary of any bird. Before he died in 1994, Puck, a Budgerigar, could speak 1728 words. A budgerigar called Oskar, who can speak 148 words, also holds the record for the biggest vocabulary for a live bird.

Budgies are tiny, vivacious, engaging, and entertaining birds with outstanding vocabularies. Despite the fact that these little birds can acquire a great number of words and song phrases, their speaking voice is too low and difficult to comprehend. A well-cared-for budgerigar may live for up to 18 years. 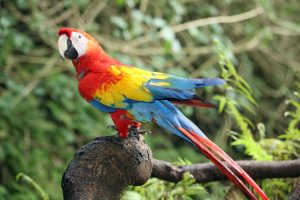 Macaws are vibrant and magnificent birds that are clever, gregarious, active, incredibly noisy, playful, sometimes destructive, and most importantly, not for everyone. They have a decent capacity to communicate and a loud, clear voice.
Macaws are difficult to teach, but once they are, they are the most cuddly and ideal family pets. 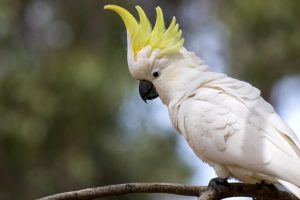 Male cockatoos are incredibly bright and fantastic talkers. Even if they are unable to communicate verbally, they are loud and always ready to give someone an earful. The clarity of their speech is on the ordinary side.
Cockatoos will communicate in human language in the same way that Donald Duck from Disney does. They are clever and cute, but they can also be noisy and filthy. Cockatoos’ behavior is described by aviculturists as being so technically oriented that they can escape from their cages, earning them the nickname “escape artists.”

They have a booming voice and are well-known for their yelling and shouting. They want to be close to their owners or companion birds and appreciate physical touch. To pet a Cockatoo, owners must have prior bird ownership experience and a strong understanding of the species. They may be a tremendous joy for the appropriate kind of owner.

One of the rarest and biggest parakeets is the Derbyan. It is nearly the same size as the Alexandrine parakeet and is twice the size of a ring-necked parakeet. It has a fair amount of talkability. Adult parrots exhibit sexual dimorphism. Females have a black beak, while males have a reddish-orange beak. The bird is energetic yet loud, and it is difficult to teach, although it does not have a lot of biting potential. The birds need a lot of engagement and socializing. Hawk-headed parrots are lively, loving, friendly, and playful birds with a low to moderate ability to communicate. They adore interacting with their masters.

Only a few people talk, and when they do, their voices are faint and whispery. The small ones might be cranky and troublesome at times.

Beautiful, vocal, and expressive birds, parrots are excellent performers. They are, nevertheless, the most abandoned pets by their owners. Many people want to keep parrots because of their unique nature and ability to communicate, but many underestimate the amount of time, devotion, and money required to care for their talking feathered companions. To retain a parrot, you must be completely devoted to them and ready to keep them even if they do not speak or make a decent pet.