If Your Dog Is Bitten By A Snake, What Should You Do? 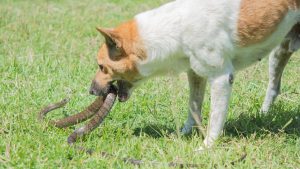 Nothing is more terrifying than playing fetch with your dog in the backyard or going on a trip with him only to have him come face to face with a snake. Your initial instinct may be to worry if your pet gets bitten by a snake. Snake bites, on the other hand, are typically non-venomous and may be avoided. Your dog’s health and safety will be ensured if you know how to keep snakes at away and what to do in the event of a bite.

Make Every Effort to Keep Snakes Off Your Property

Examine the foundation of your house. Look for unsealed spots, such as where pipes enter your property, and cover them with netting to prevent snakes from slithering inside them. Next, make sure your basement’s doors and windows are well-sealed and difficult for animals to enter. Your deck and its steps are another spot to look around the house. If your porch has a space underneath it, block it off with netting or something else. This not only makes it more difficult for snakes to get below it, but it also keeps your dog from burrowing underneath.

Remember to take care of the rest of your property as well. Keep your lawn mowed and any brush along the perimeter of your property cleared. Remove any woodpiles, huge boulders, or other waste heaps that may exist on your land. Finally, inspect any storage buildings or attached garages for any cracks or gaps near the ground that snakes may use as homes.

Because most snakes in the United States aren’t poisonous, antivenom isn’t required in the event of a bite. The following simple guide can assist you in identifying your dog’s bite, but don’t worry if you are unsure. In American snakes, there are only two forms of venom. Based on the symptoms, your veterinarian will be able to identify which antivenom is required.

Copperheads are red and brown in hue, with a coppery head (thus the name) and an hourglass marking. They grow to be four feet long and are often seen in woodpiles or leaves.

Coral snakes are little snakes with black noses and short heads. Their bodies are banded in vibrant colours of white, black, red, and yellow, with the red and yellow bands always close together. The distinction between kingsnakes and other snakes is that kingsnakes do not have red and yellow hues next to each other, which is how you can tell them apart.

Cottonmouth snakes, often known as water moccasins, are a kind of snake. They range in length from 4-6 feet and are often seen near wetlands or streams. The interior of the mouth of these snakes is white and they are black or dark brown.

Rattlesnake – Because of their rattles on their tails, rattlesnakes are sometimes the simplest to see. They’re reddish-brown in color and often feature patterns on the back. They have rough scales and arrow-shaped heads, and their eyes resemble cat eyes.

If Your Dog Comes Into Contact With a Snake, Don’t Be Alarmed

If your dog has been bitten by a snake, the greatest thing you can do for him is not to worry. If you’re not calm, you’ll have a hard time responding quickly and logically, which might worsen your dog’s injuries. Additionally, if you’re frightened, your dog will feel nervous as well, which might make him uneasy. It will spread venom more rapidly if he starts moving about too much or if his pulse becomes too fast. While working to cure the bite, try to keep your wits about you.

Take Your Dog Out of The Area

Remove your dog from the location as soon as a bite happens to avoid him from chasing the snake. The basic impulse of a dog is to defend itself by attacking his assailant. The difficulty is that this puts him at danger of being bitten again and ingesting additional venom. Even if he doesn’t receive another bite, moving around too much will make the venom he already has in his system work harder. Always attempt to get your dog away from the snake and never try to capture or kill it. You are also at risk of getting bitten as a result of this.

Look for the Following Important Signs and Symptoms

It’s important to understand the signs of a snake bite in your dog. Keep in mind that symptoms may not appear for up to 24 hours, so if you believe your dog has been bitten, keep a careful check on him. Symptoms vary based on the snake breed, your dog, and the location where he was bitten. Keep an eye out for the following.

As Soon As Possible, Take Your Dog to The Veterinarian

Even if there are no indicators that the bite is deadly, you should take your dog to the veterinarian. If left untreated, even a non-venomous bite has the potential to get infected. A snake bite may be treated in a variety of ways by a veterinarian. He or she will begin by clipping and cleaning the bite wounds. The possibilities after that differ based on the situation.

Antivenom and Benadryl, which inhibits an allergic response to the antivenom, are two common choices. Antibiotics may be given to your dog if he has a lot of tissue damage. Colloid fluids may aid with hypotension and IV fluids can help your pet keep hydrated and recuperate. Anti-inflammatory medications, narcotic pain relievers, and supplementary oxygen may be required in rare circumstances. To prevent your pet from future dangerous bites, your veterinarian may recommend a snake bite vaccination.

Your dog’s safety is enhanced by diligence. Snakes may be seen in your yard and on hiking paths, so keep an eye out. When in the woods, keep your dog on a leash to keep him out of potentially harmful circumstances. You’ll have more pleasure and less worry if you plan your excursions carefully.

Newer Top 10 Cats That Have the Appearance of Tigers, Leopards, and Cheetahs
Back to list
Older Tips for Getting Your Dog Ready to Run With You This Summer