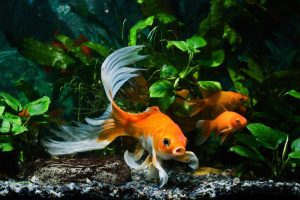 We all want to be the greatest goldfish caretakers we can be for our aquatic buddies, and we all want to make their lives as happy and healthy as possible. While some individuals want to stay uninformed of basic goldfish husbandry, most people care and unknowingly make typical blunders made by new and unskilled goldfish owners.

It’s easy to beat yourself up while dealing with ill fish or trying to fix a mistake, but don’t! You’re here seeking knowledge and education, indicating you care about your goldfish.

This is by far the most common error made while raising goldfish, or any other fish. Most people are used to going to the shop, buying a bowl or tank and some fish, and heading home. The science teaches us that this prevents normal tank cycling.

A tank cycle is the establishment of beneficial bacteria colonies. These colonies dwell in the filter, substrate, and other surfaces of the tank. Beneficial bacteria convert ammonia and nitrite from fish waste and decaying organic materials to nitrate. The nitrogen cycle produces nitrate, which is why we change water in a fish tank (more on that later). Plants use nitrogen as a fertilizer and help lower nitrate levels in the tank.

You can do a fish-in cycle, which means you already have the fish in the tank. But this isn’t perfect. The fundamental goal of a tank cycle is to reduce ammonia levels so that beneficial bacteria may grow and reproduce.

Ammonia and nitrite are both harmful to fish, and the optimal values for a tank containing fish are zero. As you may guess, this makes a fish-in cycle risky. There are things that can assist kickstart your tank cycling. However, these items do not substitute a tank cycle.

Cycling a tank with or without fish might take days to months. It takes time and effort, especially if there are fish in the tank.

To get your new goldfish home, you undoubtedly stood in the pet shop aisles, choosing out nice tank décor, fish food and a heater. Many people are unaware of goldfish’s unique demands.

Most people keep goldfish in heated tanks or bowls. Goldfish are cool-water fish, so if their home is climate-controlled, like your living room, they won’t need a heater. This isn’t always the case, but it is in most cases. On the surface, keeping your goldfish in warm water isn’t a big concern. You may not notice the bad effects on your goldfish until it is too late.

You may also be unaware that certain goldfish, particularly fancy goldfish, dislike sharp or jagged edges. They can grab and rip sensitive fins, allowing infection and stress in.

Choosing a goldfish substrate is very important at first. Goldfish have been known to acquire gravel stuck in their mouths after eating a bag of gravel. This might cause harm or death to your fish if not removed by a human. Fine substrates, like sand, or bigger substrates, such huge stones or river boulders, are frequently safer for goldfish. Some like no substrate for their goldfish.

Many individuals choose fish by going to the supermarket and picking it out. People end up choosing fish based on appearance rather than needs. Because goldfish like chilly water and angelfish prefer warm water, if you go to the market and buy goldfish and tropical freshwater fish like angelfish, one of the species will suffer.

Get betta fish and goldfish without recognizing how stressful this is for both species, causing aggressiveness and death. Choosing tiny tank mates is another goldfish blunder. Goldfish and guppies have several environmental requirements, although goldfish will consume nearly anything that fits in their mouth. This comprises guppies and guppy fry.

Some say goldfish can’t be kept in a tank alongside other fish because they’re dirty. Luckily, this isn’t true. Goldfish can live with giant snails like mystery snails and other cool-water fish like dojo loaches. However, picking goldfish tank mates should be done with care. Inappropriate tank mates will certainly cause you heartache and worry for your surviving fish.

It’s difficult because we’ve been told for so long that there are “rules” about the size of the goldfish tank. No hard and fast rules, but size matters. There are hormones in goldfish that inhibit development, which is why many people assume goldfish will not outgrow their habitat. This is partially accurate, but not entirely.

If you go to the store and buy eight 2-inch goldfish for your 10-gallon tank, you’ve overstocked it. They will grow and, even if stunted, may become uncomfortable or needy for supplies. Overstocking a tank is absolutely safe and healthy. Maintaining water quality and health just takes more preparation and attention. There is such a thing as an overstocked tank, so make sure your goldfish and other tank dwellers have enough room to move around and have fair access to resources like food.

Goldfish create a lot of bioload! A goldfish produces more trash than ten ember tetras. Many individuals choose tank filtration incorrectly, and it’s easy to see why.
You may believe “close enough” if you have a 55-gallon tank and a 50-gallon filter. You’re probably right about low bioload producers. You’re wrong about goldfish. If you have one or two goldfish in a tank, the filter should be rated for the tank size. If you have an overstocked tank, you need a filter suited for a bigger tank.

A strong filter, such a HOB or canister filter, should be used with a sponge filter that has more area for beneficial microorganisms. You won’t over-filter your tank, but you may easily under-filter it! Purification eliminates visible and microscopic waste items and aerates the tank water. Seriously, don’t under-filter your tank. You’ll be sorry!

Goldfish, like all creatures, require a balanced diet. Commercial goldfish food is ideal for your goldfish since it is formulated to suit their nutritional demands. These meals lack diversity and balance. They also give minimal nourishment but not necessarily satiety. Goldfish and Prussian carp feed all day in the wild on aquatic vegetation and tiny invertebrates like freshwater shrimp. As you may guess, feeding your goldfish twice a day doesn’t satisfy them as grazing does.

Your goldfish should eat pellets as a basis. However, flakes contain more fillers and less nutrition than pellets. Include gel foods, freeze-dried foods, frozen foods, and live foods in your goldfish’s diet. Your goldfish should constantly have access to fresh produce. Their favorite foods are romaine lettuce, spinach, arugula, herbs, and fruit such as bananas, strawberries, and apples. To avoid digestion and swim bladder issues, high sugar and protein diets should be provided infrequently.

Water changes every couple of months, or even annually, may seem reasonable after your tank has cycled and your goldfish have settled in. The nitrogen cycle? Normal filter media will not remove nitrates from your tank. A cycled tank will contain some nitrates, up to 20ppm is regarded acceptable, although others say up to 40ppm is okay.

Nitrates won’t go away if you don’t change your water and don’t have a hundred plants in your tank. So they’ll keep growing, harming your tank’s residents. Water adjustments help eliminate extra nitrates.

Another nitrate issue? Algae! Because algae are plants, they need nitrates from the water to flourish. In a balanced tank, plants absorb most nitrates while water fluctuations remove the remainder. If you don’t remove extra nitrates, algae can grow in your tank and consume nitrates that your plants don’t use.

Algae isn’t only an annoyance. It can grow so large that it chokes out other plants by taking all their nutrients.

Want to know a little secret? Poor water quality is the main cause of goldfish disease!

People often make the mistake of medicating their goldfish when they show signs of disease. Treating disease won’t work if your water parameters are off or your water quality is bad. In reality, you’re contributing to an already stressful situation. Adding stress to sick goldfish that may be treated with a simple water change or water treatment might cause more damage than good.

It’s also vital to remember that drug-resistant microorganisms exist. Antibiotic resistance occurs when you start giving your goldfish antibiotics they don’t need or don’t finish a course of therapy you started. Antibiotic-resistant diseases are difficult to cure, and even if your fish dies, the infection may remain in your tank. The greatest way to keep your goldfish healthy is to prevent disease.

Regular water changes, water treatment, and parameter monitoring are better than any medicine.

If you study your filter’s directions, you’ll discover that the manufacturer suggests replacing filter media or cartridges every few weeks. Disciplined goldfish keepers normally do this, disrupting the tank’s cycle every time. Beneficial bacteria dwell in the tank’s filter and medium. That means every time you change the filter cartridge, you’re eliminating a lot of good bacteria.

Filter media should only be changed seldom. When changing water, rinse it with filthy tank water to eliminate “gunk” without harming beneficial bacteria. Rinsing your filter material in hot water kills beneficial microorganisms.

Most goldfish keepers advocate long-lasting filter sponges and ceramic rings or beads that can be rinsed without replacement. To get the most bang for your budget, avoid tanking your cycle every few weeks.

It’s quite simple to make errors with goldfish. Proper husbandry requires much training and experience. Don’t berate yourself if you discover you’ve been wrong. Take the lesson, fix the issue, and move on. This is the best thing you can do for your goldfish and the goldfish-keeping community.

Newer What Causes Itchy Skin in Dogs and How Can You Prevent It?
Back to list
Older What to Do If Your Dog Is Digging Constantly?