How to Prevent Puppy Separation Anxiety 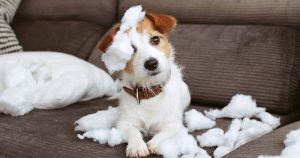 The good news is that preventing separation anxiety in pups is simple.

Unlike in the past, when dogs spent much of their time outside assisting people on their farms, today’s dogs spend the majority of their time indoors while their owners are abroad.

As a result, it’s no wonder that more and more dogs, whether pups or adults, are beginning to display indications of separation anxiety.

What you should know, however, is that avoiding separation anxiety is far simpler than treating it.

In reality, there are a few easy things you can take right now to avoid having to deal with this issue in the future.

It’s critical to start using these recommendations when your dog is still a puppy, as it’s far more difficult to break old behaviors than it is to teach new ones.

Adult dogs, too, can benefit from these suggestions.

1. Get Used to Leaving and Returning

Make it a practice to leave the house for 30 seconds a few times a day, disregarding your puppy’s reaction. The goal is to make him acclimated to you being gone while yet keeping an eye on things from outside.

Continue doing so until your dog is less frightened when you leave the house. Then gradually increase the amount of time he’s supposed to be alone and silent.

You may also determine the degree of his reaction this way, allowing you to gauge the level of anxiety you’re experiencing.

Dogs and puppies, like toddlers, benefit from having a consistent daily schedule. When it’s time for our dog to go into his crate and wait for his treat, he knows just when to do so. This is due to the fact that he always receives it before we depart.

You may achieve the same effect by leaving your house at specific times each day until the puppy associates leaving with that time of day.

As he comes to anticipate your departure and incorporates your absence into his daily routine, he will grow less concerned when it occurs.

3. Invest on a Quality Crate

Puppies are drawn to tiny, confined environments that can provide them with warmth and shelter. To put it another way, your puppy needs to feel safe and secure until you get home, and a crate is an excellent method to accomplish that.

Crates are great for separation anxiety since they may act as your puppy’s go-to spot for seclusion while you’re gone, as well as keeping him secure.

Put a weighted blanket inside the crate, together with some toys and snacks, to make it a fun place to be.

Remember, you want him to see crating as a positive experience rather than a negative one.

Note that some puppies will try to get out of confined locations such as kennels. In this situation, seek for a sturdy cage that will withstand your dog’s attempts to escape.

Following up on the last suggestion, pick something your puppy enjoys and place it in his crate before you leave the house. This might be a beloved chew toy, an old piece of clothes, or anything else that brings you comfort. Alternatively, you might pass his time alone by keeping him occupied with something delectable.

Then I put the stuffing-filled toy in the freezer to make it tougher to pull out and keep my dog occupied for a long. He is not only engaged and favorably rewarded, but he is also exhausted, falling asleep in his box shortly afterward.

I’m not sure what to say. It’s incredible!

5. Give a Behavioral Aid Toy a Try

The SmartPetLove Snuggle Puppy is a soft plush toy meant to help pups cope with separation anxiety by instilling emotions of closeness and physical warmth. When you are unable to be there, this toy will provide a buddy for your dog.

It comes with a pulsating heartbeat gadget and a non-toxic heat source to resemble other littermates, in addition to the snuggling toy itself. This is a wonderful present for dog lovers, as well as for bringing a new puppy into the family.

6. Make Some Noise in The Background

Your dog is likely to identify the background sounds from the television with your presence. It seems to reason that having that same noise available when you’re gone will go a long way toward creating a relaxing atmosphere.

Furthermore, classical music, soft rock, and even reggae have been demonstrated to alleviate tension in dogs.

On YouTube, you may find several sorts of music for dogs, or you can check at this unique music bundle for dealing with separation anxiety.

The background noise will not only serve to conceal noises from automobiles, people, thunderstorms, and other sources, but it will also give your puppy the impression that you are at home, making him feel less lonely in your quiet apartment.

7. Hire a Dog Walker or a Pet Sitter

Dogs are sociable animals, and being alone for an extended period of time is not natural for them. Even the most well-behaved puppy should not be left alone for more than a few hours.

If you know you’ll be gone from home for more than 8 hours, you should seek for assistance. In the meanwhile, your puppy will appreciate some companionship, especially if you aren’t using pee pads and he has to go outdoors.

Puppies also need to expend a lot of energy, and they need feed several times a day, so prepare ahead if you’re running late.

8. Don’t Forget to Exercise On A Regular Basis

Remember the golden rule: a weary puppy is less likely to display indications of separation anxiety since he would rather sleep than cause mischief.

Before you leave the house, take him for a vigorous walk and incorporate mental exercises and puzzle toys. These will also aid in the development of patience, self-control, and attention in your dog.

Your body language communicates a lot to your dog. Even though it feels natural, don’t go out of your way to console your dog before leaving, since this may aggravate his response. The same is true when you go home.

As though you’re the only one in the house, leave. Before you leave, don’t talk to your dog or pay him any attention. The truth is, if you leave him with a toy or a treat (as you should), he’ll be too preoccupied to notice.

Also, ignore him when you enter until he sits quietly. Once this occurs, reward your puppy for his good conduct by lavishing attention on him. You’ll have to wait till he calms down if he’s barking and leaping.

The most common strategy to raise a dog with behavioral difficulties is to spoil it. Though I realize how adorable pups are, you should not pick them up or carry them around all the time, since this will result in a dog who will constantly beg for your attention.

Of course, you want your dog to know how much you care about him. However, you must ensure that he has enough independence to operate while you are not around.

This brings me to my next point: if your puppy begins to accompany you to the restroom, he has grown unduly reliant on you. In most circumstances, this will result in a fearful dog while you are not around.

You must take efforts to break the habit, as sweet as it may appear.

You may rest assured that your dog isn’t misbehaving only to annoy you. Your puppy, on the other hand, only wants to please you and gain praise.

Accidents may occur, and you must keep in mind that separation anxiety affects your dog as well. As a result, attempt to approach these situations with care.

Punishment will just make him more worried, and it will almost certainly not address the problem. The situation is just going to become worse.

Besides, now that you’re aware of everything, you can focus on the problem rather than the symptoms.