Are there Really That Many Different Cat Breeds? 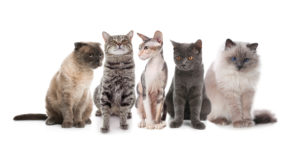 Most people spend a lot of time determining what breed to buy when they get a dog. It may not appear to be as essential with cats, yet various breeds of cats can have distinct personalities. Unless you want to display or breed your feline friend, you may not be concerned with the breed. When you understand the variations between cat breeds, you may have a clearer sense of what sort of cat you could have.

Although most breeds prefer being near people, not all of them are lap cats. Some cats are outgoing, while others are reserved. Some cats are brave and curious, while others prefer to stay on the ground. If you’re rescuing a cat, a purebred may not be an option, but you should be aware of the following common cat breeds.

1. Persian cats are one of the most well-known cat breeds. Long hair and expressive eyes are difficult to overlook. Persians are clever and people-pleasers. They have a sweet voice and a nice demeanor. These cats thrive in an indoor environment and may be rather lively at times. Make sure you have a nice cat brush, such as Catit Senses 2.0 Self Groomer Cat Brush.

2. A Bengal cat is a domestic cat that looks a lot like jungle cats like leopards, ocelots, and mar-gays. They’re active cats who want to be in the thick of things. When awake, a Bengal cat is highly lively and will want to climb and chase. When it’s time to sleep, though, this cat will be friendly and cuddly.

3. Because of their caring nature, a Maine Coon cat is known as “the dog of the cat world.” A Maine Coon is a big, muscular, and wide cat. Although the fur is long and flowing, these cats have a more rectangular appearance than a Persian cat. Females are around half the size of adult males, who can weigh up to 25 pounds. These cats like being in people’s company, yet they are also coveted mousers. They are available in a variety of colors and are fairly puffy.

4. Siamese cats are well-known, especially to those who have watched “Lady and the Tramp.” This breed is gregarious and gets along well with other animals. Siamese will want to interact with you and converse to you. Prepare yourself to spend time with a Siamese cat. They are incredibly bright, and even if you don’t ask, they may tell you precisely what they believe. Your Siamese may even “supervise” you during the day by following you around the house.

5. While an Abyssinian cat likes being around people, it will not sit on your lap. They are athletic, lively, nimble, and aware of their surroundings. This breed, on the other hand, may be exceedingly obstinate. Distracting them might be difficult. They are also unafraid. This breed is said to be the source of the saying “curiosity killed the cat.” You’ll want to make sure they have toys to play with when you’re not home to prevent them from getting into mischief.

6. The Ragdoll cat has a characteristic color-point coat and blue eyes. To keep the hair from becoming matted, this breed has to be groomed on a regular basis. This cat, on the other hand, will appreciate your presence. Because Ragdoll cats are such people-pleasers and bright, some have even been trained to play fetch. Because it is such a treasure, the Ragdoll cat isn’t much of a jumper and makes an excellent inside cat. Cat toys, such as this interactive and automated cheese cat toy, will keep your cat amused.

7. If you’re seeking for a sacred cat, a Birman, a breed descended from Burmese temple cats, is a good choice. Long, silky hair, blue eyes, and “socks” on each paw characterize a Birman. This breed makes a terrific family cat, but it requires a lot of attention and care. Your cat will play with you and want to be with you, but if you are occupied with other things, he or she will be content. It has a calm demeanor and will be a relatively quiet cat in your home.

8. In the world of cats, an American Shorthair is considered mild. Their bodies will not be too large or tiny. They’ll be active, but not too much. Because they are often kind companions, these cats are popular with families. Females may be busier than males, yet both sexes are clever and curious in their surroundings.

9. The Oriental Shorthair is closely related to the Siamese, but its short coat makes them more hypoallergenic. The ears resemble those of a bat, which is arguably the most distinguishing feature. This breed is territorial and loyal to a fault, almost enviously so. According to several cat experts, the Oriental Shorthair is one of the smartest cat breeds. You’ll have to spend some time playing with this cat; it’s a people-pleaser, but it’s also enjoyable.

10. Sphynx cats are distinguished by their absence of fur or coat. With its fine hair, the skin resembles the texture of a chamois. The breed enjoys being the center of attention and gets along well with both children and strangers. One issue with this breed is that it is prone to hereditary health issues, which are mostly the result of bad breeding procedures in the past. It is a breed that is both clever and pet-friendly. They’re pretty odd and rare. Finding a kitten might be challenging, but once you do, you will adore it.

11. Mixed-breed cats aren’t usually show-worthy, but that doesn’t mean they can’t be terrific home pets. Cats who are shown affection, companionship, and care are more likely to return with love. Mixed-breed cats may exhibit traits from a variety of breeds. Keep an eye on their demeanor to figure out what they enjoy and don’t like.

Make sure your cat gets high-quality food, a scratching post, a place to sleep, and plenty of toys, no matter what breed it is. Cats make excellent pets, despite their independent and aloof demeanor.

Newer How Can I Stop My Dog Urinating Around New People?
Back to list
Older The Meaning of 6 Typical Dog Behaviors